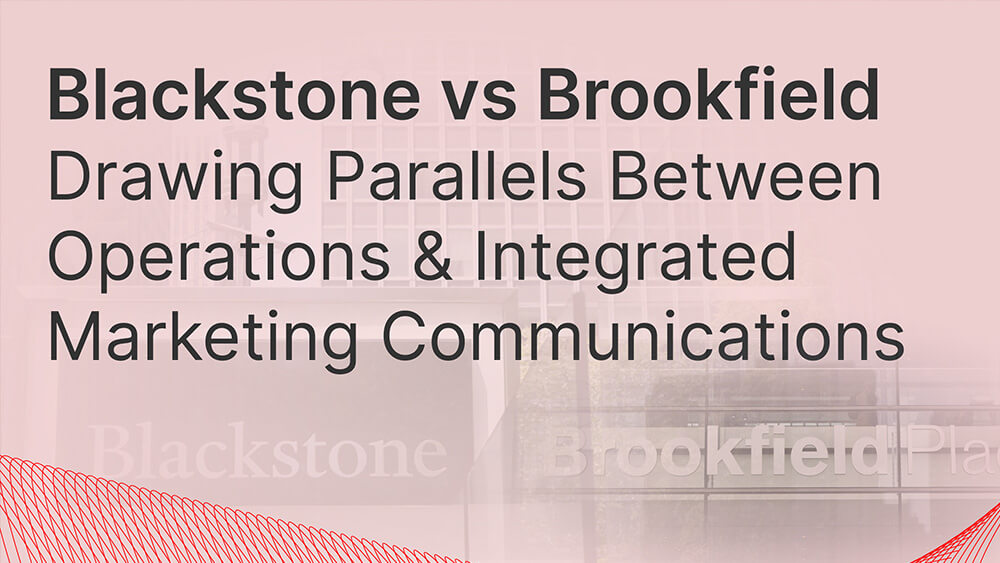 When Brookfield Asset Management announced it was weighing a spin-off of its asset management business into a separate public company, it was hard not to draw parrels to its close rival, Blackstone. The Financial Times highlighted that the firm’s acknowledgement of stockholders’ greater interest in owning so-called ‘asset-light’ investment fee streams would see the firm mirror Blackstone’s approach of holding virtually no direct investment on its balance sheet.

Clearly, we will have to wait to see how Brookfield’s major operational pivot impacts their battle with Blackstone to become the first trillion-dollar Alts firm. In the meantime, Brookfield may wish to reconsider the effectiveness of its integrated marketing communications activities. As we discovered in our first Alts 50 report, which ranks the largest alternative investment firms by their integrated marketing communications (IMC) performance, the clash of the titans is a wholly one-sided affair.

Given their size and prominence, both firms scored highly for Brand Awareness. Yet when looking at Brand Awareness over time, we start to see a trend emerging. Brookfield saw a major spike in interest following their announcement reported by Bloomberg of plans to raise north of $7.5bn for a new climate-focused fund devoted to a “net zero” shift. Meanwhile, Blackstone saw a spike in June following a series of deal announcements, most notably its plans to invest in office developer Soho China. But the positive Media Sentiment (proportion of positive and negative media mentions) that both announcements drummed up has reversed. Mark Carney, Brookfield’s Head of Impact Investing, stumbled over the accounting methods used to define “net zero”, while Blackstone experienced a burst of negative coverage after its plan to purchase Soho China collapsed.

This demonstrates the highly volatile nature of more traditional communications in private equity. Both firms score highly for Share of Voice (measured by mentions in tier-1 media) given the interest in their deals and investments, but both have – at best – mixed sentiment scores.

One way both Blackstone and Brookfield have attempted to manage brand volatility is by using their leaders to communicate the opportunity being offered to investors and each firm’s edge. This is something we have identified as a highly effective tool in building a more balanced program that truly “moves the branding needle”. Two recent positive examples bear this out: a profile of Blackstone President and COO Jonathan Gray in the Wall Street Journal and an interview with Brookfield’s CEO, Bruce Flatt, who explained in a Bloomberg interview why the firm is ripe for growth.

But where the two firm’s scores diverge is in their respective usage of the more novel tools in the IMC arsenal. Blackstone’s multi-platform approach to social media, using a blend of content around investment expertise, culture and purpose is highly effective in communicating its brand differentiation. It is delivered through an impressive variety of mediums and supported by both paid search and paid media strategies to maximize audience reach and engagement. Brookfield, on the other hand, limits itself to content focused on investment opportunity and commentary, without truly identifying what drives the firm beyond maximizing shareholder returns.

Blackstone’s approach also highlights an important trend that is visible among key players in asset management, namely, shifting the focus of digital communications to the firm’s mission, vision and values, to attract a new breed of investors and talent alike. This underscores how assessing a manager’s purpose is now a major consideration in the capital allocation process. This is something that Blackstone does this well. An example is this video in which President and COO, Jon Gray, describes the firm’s culture as the bedrock of the firm.

Overall, Blackstone’s sophisticated IMC approach is both superior to Brookfield’s and the entire alternative investment management sector. They are an outlier among alternative managers, who as a group have yet to utilize the true power of an integrated approach to marketing and communications. It is therefore unsurprising that Blackstone also lead private equity investment inflows in the last five years, with $95.9bn compared to Brookfield’s $21.7bn, according to Visual Capitalist.

A new breed of competitor

Alternative investments continue to attract increasing allocations from institutional investors, who are seeking diversification and uncorrelated returns. Indeed, a new wave of players has entered the fray in recent years, notably passive giants, Blackrock and Vanguard, which have launched private equity funds targeted at both institutions and high net worth clients.

All in all, this has cast a spotlight on the way specialist alts managers communicate. The superior ability of this new breed of competitor in communicating purpose beyond returns, puts traditional specialist alts firms as a disadvantage versus the globally renowned brands. The data from Peregrine's research paints a stark picture:

Of the 50 largest alternative investment managers in the world, 66% saw declining brand awareness over the past year.

Against a bleak back drop of declining interest in asset managers’ brands, more than ever, private equity firms and other alternative asset firms need to begin utilizing their outbound communications to inform and educate investors. Providing insight where they see opportunities for investors as well as the purpose of their firms beyond securing long term returns is crucial. And this must be delivered in innovative, engaging ways, utilizing the full IMC toolkit. Doing this will help alternatives managers grow to their full potential.

Communicating in the New World: the Crucial Role of Digital in Asset Management Brand Building